Giant On The Beach 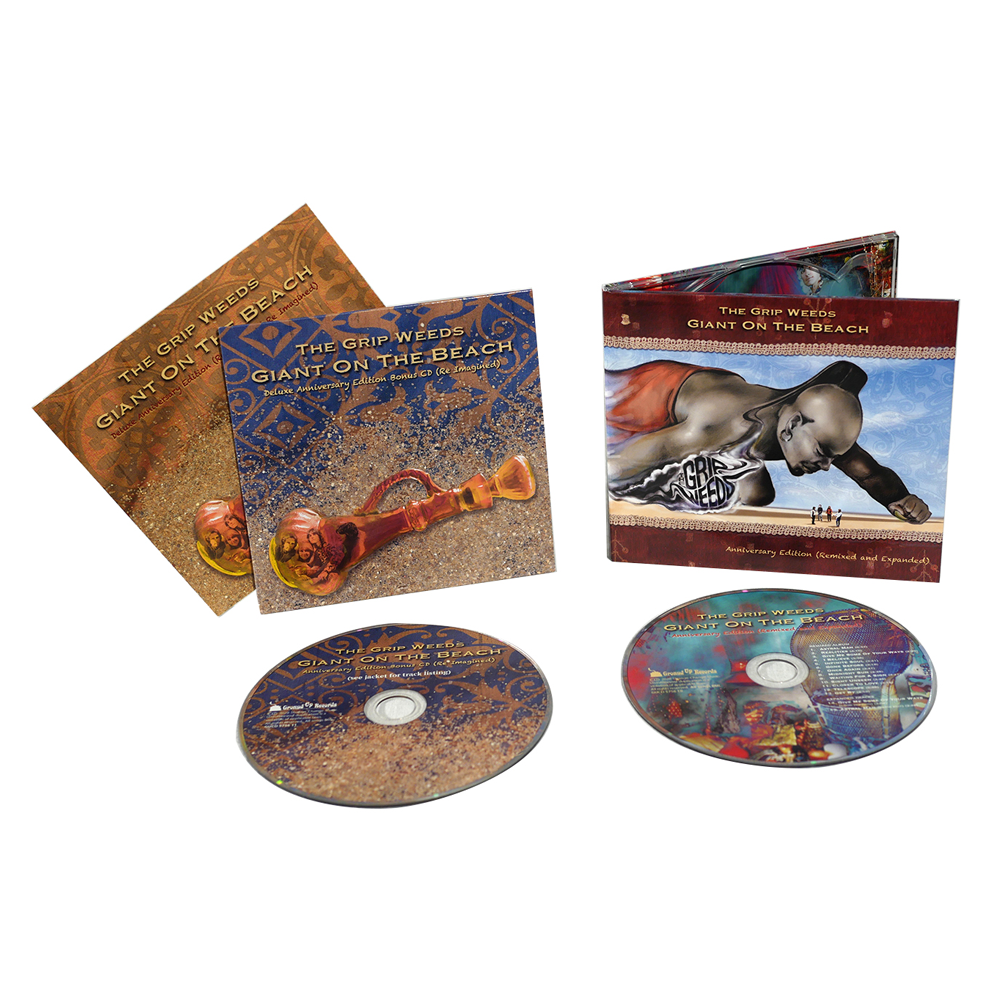 Giant On The Beach, their fourth album, was a giant step forward for The Grip Weeds, lifting their multilayered psychedelic pop-rock to new heights. Its thirteen self-penned songs are at once powerful, mystical, beautiful and original. From writing, recording and producing the entire album themselves in their own studio (House Of Vibes) to conceptualizing and designing the lavish album artwork, they take the DIY ethic to a whole new level.

The remixed, re-imagined Giant On The Beach Anniversary Edition is now available on vinyl, double CD, standard CD, and FLAC/HD/mp3 downloads. The vinyl edition has been issued by U.K.-based Sugarbush Records. "We've grown as engineers and producers since 2004," said Kurt Reil. "There's nothing like living with a group of songs for 15 years to figure out what makes them tick."

Originally released in 2004, the album fused pulverizing rock, psychedelia, and soaring harmonies into a heady mix that won over legions of fans, including Bruce Springsteen guitarist/Sopranos star Little Steven Van Zandt. What Van Zandt and the thousands of fans who saw that band on tour that year in Europe and the United States heard in Giant On The Beach was a way to scratch that classic rock itch without having to pretend the world stopped in 1975.

At the time Oasis was trying their best, but no modern group has ever summoned the authentic sound and swagger of rock's glory years while maintaining their own identity as effortlessly and successfully as The Grip Weeds did for Giant On The Beach. From a production standpoint, the album was a confident yet nuanced slab of modern, classicist rock that bridged (or connected the dots of) popular music's present, past, and future.

Of the original album’s 13 tracks, “Astral Man” opens with a swoosh of lysergia, a riff sharp enough to cut diamonds, and intergalactic harmonies strapped to a magic carpet groove. “Give Me Some of Your Ways” asks ’is this love or is it lust? Could these harmonies turn rocks into dust?’ “Midnight Sun” pulses with menace, power, confusion, and release. These are just a few of the sonic treasures to found here.

A Technicolor treat for the ears, the enhanced presentation of the Giant On The Beach Anniversary Edition has even more pow and wow than the already stellar original issue. The Grip Weeds have not only remixed the original 13-track album, but they've also re-recorded several key album tracks in new live-in-the-studio arrangements. Additionally, the Giant On The Beach classic "Give Me Some of Your Ways" - originally recorded as a wistful, breezy showcase for the Weeds' renowned vocal harmonies - has been reimagined for this collection as a full-on electric stomper.

The standard versions of Giant On The Beach Anniversary Edition feature two bonus cuts, while the deluxe editions come with a bonus CD of live concert performances, radio appearances, demos, topped off with a deluxe pdf booklet filled with lyrics, recording notes, interviews and links to exclusive video content. The FLAC/HD/mp3 standard and deluxe editions both feature pdf booklets.

“…a palpable group chemistry that so many bands boast of but so few actually possess.” -Magnet

“Many have tried, few have succeeded, but this veteran band with a lead-singing drummer comes as close as any to faithfully re-creating the sounds of musical heroes of yore.” –Under The Radar Magazine

"It’s The Grip Weeds at the top of their game." -Musoscribe

"The Who meet The Beatles in an alley and duel to the death, spilling blood all over the hapless Oasis, who have been forced to sit in leg-irons cowering in fear, as Alex Chilton and Chris Bell keep handing the combatants fresh weapons. Yes, it's that good." -Shindig Magazine


"Give Me Some Of Your Ways" (Loud Version)